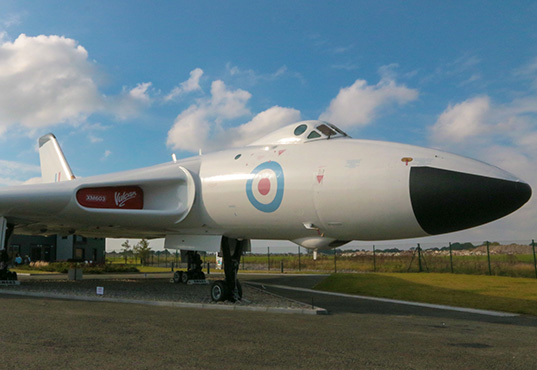 The flourishing Avro Heritage Museum, located in Woodford, Cheshire, has revealed its largest renovation project, the Avro Vulcan XM603, to the media and public.

The heritage museum opened its doors on October 8th 2015, with the Avro Vulcan XM603 being one of the museums key attractions in serious need of refurbishment. With the teamwork of enthusiastic volunteers and kind donations, including paint donated by HMG, the lengthy project is now complete with the Vulcan sporting the same iconic livery as when it was first manufactured in 1963.

HMG Paints equipped the volunteers with a coatings system to comply with the original specification of the original drawings. To achieve this the products used included HMG’s anti-corrosive BDX primer, followed by Coach Enamel which is an ultra-high gloss top coat, combined with excellent water resistance and extensive exterior durability and toughness. Dave Pierce, the project leader for the museum, could not thank HMG enough “to have such fantastic support with the donation of almost 500 litres of paint and materials. Without HMG this would not have been possible”

Manchester based HMG Paints manufactured and supplied the coatings, along with hands on technical support from Sales Representative Steve Rawson, to restore the XM603 to exactly as she was when first exiting the main hanger at Woodford in November 1963. “We were delighted to be part of such an exciting project and are very proud to have enjoyed the journey with the volunteers who have done a fantastic job of renovating the aircraft in our paint” said Steve.

The museum preserves and protects the heritage of Avro aircraft development from 1907 to 2011 including such iconic aircraft as the Avro 504, Anson, Lancaster, Shackleton, Vulcan, and Nimrod. When the Woodford site was closed with the cancellation of the Nimrod contract, the existing Heritage Centre was due for demolition and volunteers worked tirelessly to store all artefacts and archive material ready for re-establishment in the new museum, complete with shop café and a complete Vulcan cockpit, on the far side of the airfield. A significant element of this heritage is the major role played in aviation history by the factories at Woodford and Chadderton.

A key part of the heritage of Woodford Airfield was the production of the Vulcan bomber, which in the cold war was a major part in the nation’s nuclear deterrent force. The Vulcan’s final act was the legendary raid on Stanley Airfield in the Falklands during the Falklands war.

Following the conflict all Vulcan bombers were retired and several acquired by various collections in the UK. With all 136 Vulcans being built at Woodford, it was only fitting that in March 1982 XM603 returned to the home of her birth and became a static display at the BAE site at Woodford.