For the fourth year running, the male members of staff at HMG Paints Ltd will be growing moustaches in support of the global charity initiative, Movember. 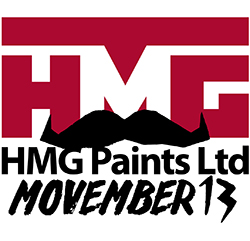 For the fourth year running, the male members of staff at HMG Paints Ltd will be growing moustaches in support of the global charity initiative, Movember.

Employees in Manchester, at the UK’s largest independent industrial paints manufacturer, will start the month with completely shaven faces, before cultivating hirsute additions to their upper-lips throughout November.

The Mo’ growers will not only be raising money for a fantastic cause, but will also become ‘walking,talking billboards’, raising the awareness of two often-overlooked men’s health issues, prostate cancer and testicular cancer.

Over the last three years, twenty HMG employees have managed to generate over £1600 for the charity by growing a fine variety of facial hair. The donations were provided by generous, or maybe sympathetic, customers, suppliers, family members and friends. 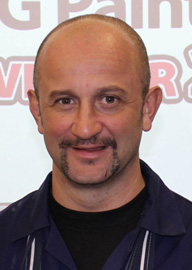 Foreman, Russ Williams (pictured), was generally considered to have cultivated the finest facial furniture, but all of the guys who took part produced valiant efforts.

For 2013, Movember organiser and HMG Marketing Manager, Stephen ‘Paddy’ Dyson, who will be growing some wispy whiskers himself, is hoping to recruit still more Mo Bro’s at the Collyhurst Road factory and raise even more funds for their nominated charity.

In this country, prostate cancer is the most common cancer amongst men, with 36,000 cases diagnosed annually, so HMG has selected The Prostate Cancer Charity as its nominated cause. Donations can be made through our Movember Space, similar to Just Giving, by going to http://www.moteam.co/HMG-Paints.

These Manchester Mo Bro’s will be encouraged by the knowledge that they are part of a truly global movement, involving more than a million people from countries around the world. Last year, the UK Movember campaign alone raised £27million and the HMG guys – and the Mo Sista’s who are supporting them – are proud to be doing their bit. 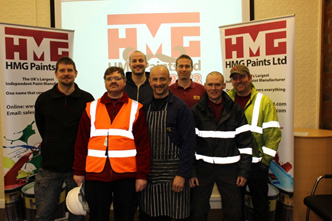