With many offices, factories, pubs and households in football-crazy Manchester planning to fly the flag for England in the build up to the 2010 World Cup, HMG Paints is going a step further by repainting its landmark sculpture as a giant Cross of St George. 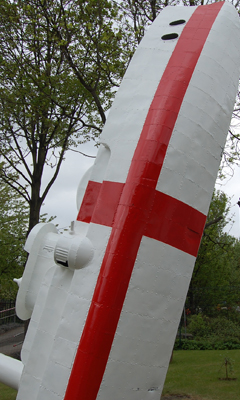 With many offices, factories, pubs and households in football-crazy Manchester planning to fly the flag for England in the build up to the 2010 World Cup, HMG Paints is going a step further by repainting its landmark sculpture as a giant Cross of St George. The 25ft high steel sculpture of an upended submarine, which is set in ten tons of concrete, is a familiar sight outside its Collyhurst Road headquarters, having been installed almost eighteen years ago. As a manufacturer of high performance paints for industrial, transport, construction and structural applications, the family-owned firm clearly has the resources for a decorating job of this scale, although it is normally coated in a clear anti-corrosive finish. 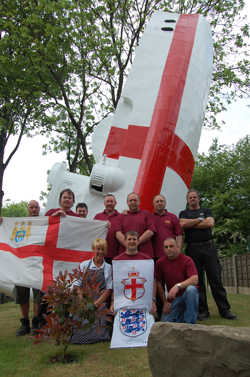 “As a Manchester-based firm, there is normally some good-natured banter between supporters of City and that other team,” says Evertonian & HMG’s Marketing Manager, Paddy Dyson. “So we thought we’d repaint our eyecatching sculpture and really all get behind the England team – apart from our Scottish sundries sales guy, of course!”

Named ‘Dreadnowt’, a local dialect take on the Dreadnought-class battleship, it was originally sculpted by Manchester artist Jonathan Woolfenden and is part of HMG’s informal patronage of the creative arts, which last year featured a city centre exhibition for abstract painter Max Hague. The submarine is described as an ironic piece of Jules Verne-style imagery, which is supposed to symbolise ‘emergence’ – a fitting icon for an England team hoping to emerge from ’44 years of hurt’.

“Hopefully people driving past will be inspired to show their support for England too,” adds Paddy. “Historically, around World Cup time, we always have an influx of orders for red and white paint and we’re expecting the same this time. So, our newly-refurbished trade counter is fully stocked with suitable paints, as well as the sundries needed for application.”

HMG is giving all of its staff an extra half day’s holiday to allow them to watch the England v Slovenia match, which could be critical. It has also set up a page on its website www.hmgpaint.com/news/hmg-fly-the-flag for staff, customers, friends and others to upload pictures of their own red and white displays.

You can upload your photos straight to the HMG Fly the Flag Flickr group via the following link:
http://www.flickr.com/groups/hmgflytheflag/
We look forward to seeing how else everyone else is getting behind the team as they try to bring the World Cup home.