On October 4th 1930, the ill-fated British airship R101 took off on its maiden overseas flight to India, only to crash dramatically the next morning. The day it departed, Manchester paint manufacturer HMG Paints was founded, virtually at the birth of the modern coatings industry, through the earlier development of ground-breaking cellulose, acrylic and emulsion paint technology. 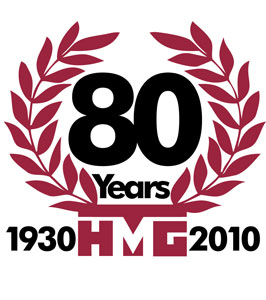 On October 4th 1930, the ill-fated British airship R101 took off on its maiden overseas flight to India, only to crash dramatically the next morning. The day it departed, Manchester paint manufacturer HMG Paints was founded, virtually at the birth of the modern coatings industry, through the earlier development of ground-breaking cellulose, acrylic and emulsion paint technology. That HMG has not only survived, but thrived and grown over the ensuing years is a testimony to its undoubted technical skills, enterprising management, focus on customer service and continuous record of new product innovation. Born in the era of airships travelling sedately at 50 knots, today its high performance coatings protect British-engineered rocketships, propelled at speeds up to 500mph and acceleration forces of 5G, and much, much more.

A proudly independent UK manufacturer in an industry dominated by multinationals and still owned by direct descendents of one of the original founders, HMG nowadays produces millions of litres of paint annually and can rightly claim that ‘our name covers everything’. In fact, its surface coatings are applied to virtually every man-made object, including trains, planes and automobiles, buses and coaches, ships, boats and lighthouses, bridges and buildings, furniture and wooden toys, models and artefacts, hot air balloons, electrical goods and light bulbs, even nature’s own grass pitches.

Back in 1930, when Mickey Mouse first appeared, the World Cup kicked off in Uruguay, Gandhi began his campaign of civil disobedience and the tallest man-made structure, the Chrysler Building, opened to the public, a Belgian-educated travelling salesman Harold Marcel Guest, got together with Herbert Falder, Stanley Wallwork and the unusually named Bertram Bernie, to form H Marcel Guest in Manchester’s Altrincham Street. Initially producing cellulose capping solutions for sealing beer bottle tops, the firm’s diversification into cellulose paint came about literally by accident, when an improvised coating was urgently made to conceal damage to Marcel Guest’s car.

In 1933, the entire enterprise was transferred by horse and cart to Fitzgeorge Street, at which point the eponymous founder agreed to be bought out for the princely sum of £100, including rights to the name, by Herbert Falder, grandfather of current MD John and Marketing Director Stephen. Building on the sale of such products as ‘gut reviver’ and white cellulose lacquer to tennis racquet manufacturers, acetone for sterilising bandages and general purpose synthetic enamel for coating ‘absolutely everything’, H Marcel Guest continued to grow its business, despite the onset of war, eventually transferring to its present Collyhurst Road site in 1959.

By that time, Herbert’s son, Brian Falder, had joined the company, later succeeding his father as MD and overseeing a major period of growth for HMG, before semi-retiring as Chairman in the 90’s. In 1963, the firm secured its first major contract for finishing systems with a major motor coach builder, the first steps on a commercial journey to becoming the No 1 paint supplier to the UK bus and coach industry. It also developed a strong market presence in the commercial transport, railway, civil engineering, construction, offshore and marine sectors, at the same time spreading its wings internationally through subsidiaries and associated companies in Europe, America and the Middle East. Latterly, it set up a joint-venture manufacturing company in the burgeoning industrial economy of India, ironically the destination of that early R101.

Now trading as HMG Paints, although fondly remembered by trade counter customers as ‘Marcel Guest’, the company’s reputation for product innovation has been forged through such developments as a biocidal antifouling for boats, flexible paint for commercial truck sides, PVC finishes for architectural coatings, temporary grass markings for sports grounds, anti-graffiti coatings for buildings, high gloss acrylic that makes rockets fly faster, self-curing automotive topcoats that recover from scratches, and water-resistant finishes that can literally be applied in the rain. It has also formulated a new generation of water-based products that meet today’s need for minimal solvent content and ultra low emissions.

The important environmental role of paint in protecting and preserving man-made structures is reflected in the restoration of historic buildings, vintage vehicles and cars, ships, steam engines, aircraft, even Victorian post boxes with HMG surface coatings, while modern constructions made from increasingly-scarce raw materials are similarly safeguarded from corrosion and decay. The decorative function of paint is also displayed through HMG’s patronage of local artists and sculptors, who are able to draw upon over 50,000 different shades in the company’s unrivalled colour library.

Close to home, HMG has won environmental and corporate social responsibility awards for the sympathetic management of its Manchester production site and has created a riverside tree-planting initiative that has been adopted by regional woodland projects. As a family-owned firm, it takes pride in supporting community enterprises, from schools and drop-in centres to waste recycling, and has an enviable reputation for staff retention, with many long-serving employees among its workforces and members of the same families working alongside one another. The next generation of the founding Falder family is also represented through great grandson Jonathan, who is currently helping to develop an online marketing business that will bring some of HMG’s highly innovative products to an even wider consumer audience.

MD John Falder is planning to commemorate the firm’s anniversary by planting an oak tree, a traditional symbol for celebrating eighty years: “We already have a flourishing native woodland area on our site and a newly-planted oak sapling seems entirely appropriate,” he says. “Like an oak, HMG Paints has grown steadily and strongly to become a sturdy and flourishing entity. The oak tree is also our national icon, once used to build the frameworks of our houses, barns, halls, carriages and ships, and that reflects our own proudly British heritage.”