The conservation and protective roles of surface coatings are often overlooked, yet safeguarding steel structures from corrosion, for example, or returning historic fabrications to original condition are important, environmentally, aesthetically and often culturally. Take the Avon Vale canal barge, an historic workboat that once plied its trade on the Kennet & Avon Canal, transporting equipment and providing a platform for canal-side maintenance. 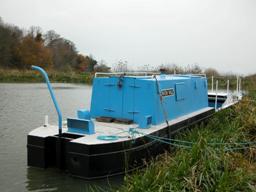 The conservation and protective roles of surface coatings are often overlooked, yet safeguarding steel structures from corrosion, for example, or returning historic fabrications to original condition are important, environmentally, aesthetically and often culturally. Take the Avon Vale canal barge, an historic workboat that once plied its trade on the Kennet & Avon Canal, transporting equipment and providing a platform for canal-side maintenance. Formerly a rusting hulk, half-submerged at the top of a flight of locks, it has now been rescued and restored by the Kennet & Avon Canal Trust, then protected and liveried with a high performance paint system, supplied by HMG Paints.

The year-long project was undertaken by volunteers from the Trust, aided by shotblasting from local chandlery Devizes Marina and all the necessary primers, undercoat and top quality coach enamel from HMG Coatings South. The Andover-based company is HMG’s marine paints distributor and its MD, Alan Whitewick, is a canal boating enthusiast and the proud owner of a 57’ narrowboat moored on the Kennet & Avon. So when his firm was approached to help sponsor the restoration project and provide around 100 litres of FOC product, Alan could hardly refuse, especially as the barge is an excellent showcase for HMG’s marine type coatings and the environmental role of paint. 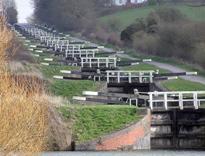 The Trust has been in existence for almost fifty years and was formed to restore the then-closed Kennet & Avon Canal, which was eventually reopened by Her Majesty the Queen in 1990. Running from Reading to Bristol, it is England’s most southerly cross-country broad beam canal, originally built by celebrated engineer, John Rennie, around the turn of the 19th century, and its natural rolling landscape makes it one of the country’s favourite waterways. A spectacular feature is Caen Hill Locks, a flight of 29 locks engineered by Rennie to climb a steep hill to Devizes, Wiltshire, which rises 237ft (72m) in 2 miles, requires some 32 million litres to operate and is the longest flight in the UK.

The Avon Vale, a Class C British Waterways workboat, was rusting away at the top of the Bath flight of locks, where it had been partly submerged for almost four years. The Kennet & Avon Trust, whose objectives are to protect, restore and promote the canal heritage, approached British Waterways’ South West General Manager, Ian Jarvis, who agreed to hand over the 42ft (12.8m) long boat to the Trust, provided it was completely restored within a 5-year period.

The bilge was flooded, the steelwork badly corroded and the Lister TS2 diesel engine had totally seized, so the Trust launched an appeal to restore and maintain the historic barge. Within a year, the exterior had been completely refurbished, with the hull and engine bay grit- blasted and refinished with paint donated by HMG, whilst the internal fit-out is also nearing completion. The engine has been repaired and refitted, so the boat now runs smoothly under its own power.

For priming and protecting the hull and other steelwork, HMG’s HB14 high build, alkyd phenolic-based primer was used, which offers outstanding adhesion and excellent corrosion resistance, due to the inclusion of modified zinc phosphate and iron oxide pigments. After undercoating with a DG142 high opacity synthetic product, several topcoats of traditional, high build Coach Enamel were applied, its long wet edge allowing a high gloss finish with no brush drag. Liveried in original British Waterways blue and white colours, the paintwork combines optimum water resistance with extreme durability and toughness.

The newly-restored barge has now moved from its moorings to the top of the Caen Hill flight of locks, where it has already resumed its workboat duties. Its first outing was to help a family move house to Bradford on Avon, via the canal, since there was no access to the canalside property for large removal lorries. Shortly, the Avon Vale will be signwritten with the names of the restoration sponsors and, this summer, it is scheduled to appear at the Newbury Water Festival, for Kennet & Avon Canal’s 200th anniversary celebrations, and at the Inland Waterways Association Festival & Boat Show on the Thames, where it will be officially handed over to the Trust by British Waterways.