The conservationist role of paint is often underestimated, yet it helps to protect and preserve many vital raw materials like steel, wood and masonry, extending their service life and saving valuable natural resources. Manchester-based HMG Paints demonstrated this recently when it supplied over 500 litres of its rust inhibiting primer, Ferrozinc, to protect the hull of mainland Britain's only surviving World War I warship, Her Majesty's Monitor M33. 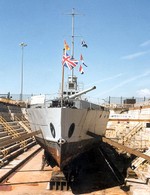 The conservationist role of paint is often underestimated, yet it helps to protect and preserve many vital raw materials like steel, wood and masonry, extending their service life and saving valuable natural resources. Manchester-based HMG Paints demonstrated this recently when it supplied over 500 litres of its rust inhibiting primer, Ferrozinc, to protect the hull of mainland Britain's only surviving World War I warship, Her Majesty's Monitor M33. The 650 ton, shallow draft, monitor-class steam warship, built originally in 1915, is the subject of an extensive restoration exercise by Hampshire County Council Museum Service, under the direction of Project Manager and Curator of Maritime Vessels, Peter Lawton.

Due to funding issues and discussions on how best to integrate M33 within the naval heritage area at Portsmouth's historic dockyard, the decision has been taken to temporarily mothball the vessel, possibly until 2008. Following an extensive anti-corrosive electrolytic process on the hull, designed to remove chloride and passivate the steel plates, the now completely bare metal is being protected by a single coating of HMG's Ferrozinc, to provide an anti-corrosion barrier in storage.

Based on an ironclad warship vessel used during the American Civil War, Monitors were first employed by Britain in World War I, when it needed shallow draft vessels suitable for shore bombardment, to strike at territory held by Germany and support landings of troops. Commissioned by Winston Churchill, a new class of small Monitor, mounted with two 6 inch guns, was built by Harland & Wollf in 1915, with M29, M32 and M33 all launched on the same day, 22nd May 1915. M33 provided support for the evacuation of troops at Gallipoli and was then reallocated to the Aegean for the rest of the war, before seeing action again in North Russia in 1919, to cover the withdrawal of Allied and White Russian forces.

After the war, there was little use for coastal bombardment vessels, so most of the small Monitors were disposed of, M32 going to Shell; however, M33 was recommissioned in 1925 as a minelaying training ship, later receiving the name Minerva. Up for disposal again in 1939, Minerva was reprieved and converted to a floating boom defence support ship in 1943, with its engines, boilers and funnel all removed, before being returned after the war to Portsmouth, as a floating workshop and office. In 1987, she was sold by the MoD to Hartlepool Ship Preservation Trust and taken by barge to the North East; but the trust ran out of funds and, four years later, Hampshire County Council decided to restore M33 itself, at her old base in Portsmouth. "M33 is an important part of our naval heritage. Apart from being one of few examples of early 20th century warships and the variety of roles she performed, M33 was equipped with technologically interesting systems that were still in use until the 1960's," says Peter Lawton. "It was one of the first to be fitted with radio, a steam turbine generator for heating, passive hydrophones for seeking out submarines and a high-velocity anti-aircraft gun for anti-aircraft fire. It was the first ship with inboard latrines and the first to use light fuel oil."

Most of the work has now been completed to restore the exterior of the ship as near as possible to her 1915 configuration, including the steering compartment, fore and aft guns, shell handling room, masts and funnel. A preliminary examination of the hull showed a number of areas for concern, however, and the M33 was dry docked, right alongside HMS Victory in Dry Dock 1. A massive clean-up operation of the hull was undertaken, during which 11 tonnes of rust and debris were removed using high pressure water jets. The dry docking also enabled samples to be cut from the hull and it was determined that an electrolytic desalination process, employing a weak electrical current and a dilute solution of sodium carbonate, should be used to remove chloride-sponsored corrosion, especially between the riveted joints, and to passivate the steel plates. Thus, the hull was flooded to a depth of 1.5 metres, just above the water line, for a period of four months, the largest ever application of this technique and of great interest to the nautical heritage community.

During the process, saponification by hydrogen ions also removed the paint, leaving bright, bare steelwork. As the M33 was due to be mothballed for up to five years, consideration was meanwhile given to how to protect the bare metal so that corrosion would not recur if even the slightest amount of moisture were present. HMG's Ferrozinc was the solution adopted; this is a high performance, water-thinnable rust conversion primer, with excellent long-term barrier properties. An easily applied single pack material, it is normally overcoated with a suitable primer and topcoat system for prolonged corrosion resistance, but can be left as an uncoated film, as with this application. "We carried out tests, by taking samples of steel plate, giving them a quick coat of Ferrozinc, and immersing them in water, for almost a year," says Peter Lawton. "There are still no signs of rusting and we reached the conclusion that it's a pretty impressive product."

Proud of its role in heritage preservation, HMG Paints supplied the museum with a total of 525 litres of Ferrozinc, at a very generous discount, and has taken a keen interest in the M33 project ever since. The primer was used to treat some 300 sq m of hull steelwork, again with just a single coat, and there is every confidence that Ferrozinc will perform exactly as desired. In the future, full-sized dioramas will be created within the hull to give visitors a real idea of what the engine room, boilers and other internal systems looked like around 1915; while a hole cut through the foc'sle in 1924, for mine storage, will be adapted for visitor access and a viewing platform.

M33 is already listed in the core collection of the National Register of Historic Vessels and a lottery bid is being compiled by Hants County Council to help display the ship in all its former glory.