HMG Paints' Acrythane A211 high performance polyurethane topcoat is normally associated with protecting cars, coaches and commercial vehicles, thanks to its superb long-term durability and outstanding weather resistance. Now, however, it is also performing conservation duties on a newly-restored historic building in Oxford. 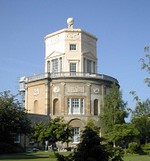 HMG Paints' Acrythane A211 high performance polyurethane topcoat is normally associated with protecting cars, coaches and commercial vehicles, thanks to its superb long-term durability and outstanding weather resistance. Now, however, it is also performing conservation duties on a newly-restored historic building in Oxford.

The building is the 18th century Radcliffe Observatory, built with funds from Queen Anne's physician Dr John Radcliffe (1652 - 1714) and now used as a common room by Green College. Sharing its patron with the magnificent Radcliffe Camera library, the observatory was recently cleaned and restored by historic building specialist, E Bowman & Sons of Stamford, and the project has created much interest within Oxford, since it is such a well known and cherished landmark.

Acrythane A211 is playing a modest, yet critical role in this project, by sealing and protecting the original brass inscriptions, which name the figures of Eight Winds that encircle the top of Radcliffe Observatory's octagonal tower. The two-pack acrylic polyurethane was specified by London consulting architects, Peter Inskip + Peter Jenkins Architects, and the solid brass letters were sprayed by Buckinghamshire bodyshop, L W Burrows & Sons.

Ever keen to underline the conservation credentials of its high performance surface coatings, Manchester-based HMG Paints supplied the product at a discount, offered application advice and maintained a close interest in this noteworthy project. Green College is a graduate college of the University of Oxford and its three-acre site is dominated by the eighteenth century Radcliffe Observatory, which functioned as an astronomical observatory for 160 years, until its equipment was transferred to the less-polluted atmosphere of Pretoria, South Africa.

Building began in 1772 under the direction of architect Henry Keene, although following his death in 1776, the Observatory was completed to a different design by James Wyatt, who based his idea on a smaller Tower of the Winds in Athens. The sculptor John Bacon also used this original tower as the basis for the flying figures of the Eight Winds, carved in Windrush stone around the top of the Observatory. The Greek inscriptions for these winds, including Boreas (N), Apeliotes (E), Notos (S) and Zephyros (W), are featured in brass lettering, just below the sculptured panels.

Radcliffe Observatory, consisting of a north facing semi-circular central building and Wyatt's Tower of the Winds above, now houses a common room for 300 graduates, the college dining room in the former library above and, on the top floor, the octagonal observing room.

Over the centuries, the condition of Bacon's Cotswold stone sculptures had deteriorated quite badly, while the building's eleven Signs of the Zodiac, originally modelled for the Coade Stone works by JCF Rossi, also required attention. Thus, the Warden and Fellows of Green College commissioned the conservation project, which was monitored throughout by Domestic Bursar, Gerald Chambers, in consultation with project architect Stephen Gee, of Inskip + Jenkins.

The project first entailed conservation cleaning of all the masonry work, the 18th century artificial Coade stone panels, including the Morning, Noon and Night carvings, the Bacon sculpted figures, cast lead statues and topmost copper globe, and the brass lettering elements. It also involved sensitive stone repairs with sculptured indents and lime mortar, as well as the limewashing of all lead-painted masonry elements.

The contractor was Lincolnshire-based E Bowman & Sons, which has undertaken many restoration projects on important historic buildings and boasts an in-house team of skilled craftsmen, which is able to undertake most aspects of conservation repair work, together with the traditional skills of stonemasonry, leadworking and joinery. For the Radcliffe Observatory contract, this team was supplemented by the detailed stone sculpting of Richard Noviss and the carved masonry work of Corin Johnson. Modern practices of conservation repair were adopted, as opposed to wholesale stone replacement methods used in the past, ensuring much of Bacon's original, fine sculpting is retained.

Bowman's Conservation Manager, Fred Markland, who managed the contract, contacted HMG Paints, when the architects specified Acrythane A211 for applying a clear lacquer coating to the brass lettering, on the advice of conservation experts. HMG advised that A211 needed professional application, preferably by an automotive bodyshop, and suggested that a high gloss finish was more durable than the proposed matt, especially as technical performance was more important than aesthetics at that height above the ground.

Renowned for its excellent all-round exterior durability and resistance to severe weather conditions and physical/chemical cleaning regimes, Acrythane A211 is suitable for application to a variety of substrates, including ferrous and non-ferrous metals, wood, concrete and plastics, and is an extremely versatile finish with a wide range of end uses. Its technical properties and rapid drying characteristics makes it a first choice transport coating, as a clear or pigmented topcoat, while industrially it is used as a low temperature baked enamel, the short stoving schedule ensuring quick throughput.

Now its qualities are being recognised in the conservation field, adding another dimension to its versatility.