Eight students from Manchester Communication Academy have successfully completed the first stage of their pioneering Future Entrepreneurship Partnership at HMG Paints Ltd. Part of HMG Paints ambition to develop local youngsters into pioneers of the future. 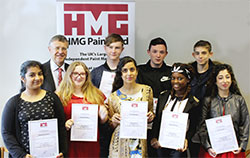 Eight students aged 14-15 from Manchester Communication Academy have successfully completed the first stage of their pioneering Future Entrepreneurship Partnership at HMG Paints Ltd.
HMG Paints, the UK’s largest independent industrial paints manufacturer, invited the students to visit the site in Collyhurst, Manchester on a weekly basis to learn about the industry and gain invaluable business experience.

The program began in September 2013, with 100 eager Academy students applying for the exclusive opportunity. After a rigorous, three month selection process, the eight outstanding entrepreneurial candidates were chosen to take part in the scheme.

Starting in January 2013, the young entrepreneurs began working in departments across the business, learning about sales, accountancy, marketing, formulating colours and research and development. Mentored closely by experienced HMG employees, the students have embarked on a wide range of projects that have included developing a range of eye-catching nail polish colours and staging, filming and editing a promotional video.

One of the eight budding entrepreneurs, Lewis Whalen, enthused about the partnership: “During the project I have really enjoyed being part of the team here at HMG, but have also become much more independent. The last six months have been an incredible experience for me and without this opportunity I would not have acquired essential skills that I will be able to draw upon throughout my working life.”

In September, all eight students will be returning to HMG Paints on a weekly basis to complete the second phase of the partnership. In pairs, the students will be specialising in chosen departments of the business and using their newly acquired business acumen and industry knowledge to establish exciting projects in new business areas for HMG.

John Falder, Managing Director of HMG Paints and President of the British Coatings Federation, is thrilled with the progress made by the students: “The first stage of the partnership has been a complete success. HMG has always supported the development of its employees and currently has eight apprentices working on site. This project continues this tradition whilst also providing the candidates with valuable business experience that will give them a competitive advantage in their future careers.”

The partnership is a result of a long term relationship between Manchester Communication Academy and HMG Paints. In October 2013, HMG supplied the school with 100 litres of coloured decorative emulsion paint for the Harpurhey and North Manchester Handmade Film Festival. The paint was used by Academy staff and students to create a colourful Manchester street scene that provided attendees with a nostalgic trip down memory lane.

Steve Taylor, Lead Professional in Careers and Partnerships at Manchester Communication Academy, believes similar pioneering partnerships could become an established program nationwide. “The project has been fantastic for the students, as it has allowed them to take their classroom skills into workplace scenarios and has also helped inform their decisions about a future career. Partnerships of this kind are in sync with the government’s educational objectives and offer significant benefits to businesses, schools, students, local communities and the UK economy.”