HMG Paints was one of just 119 successful bids nationally, in the second round of the £1.4 billion Regional Growth Fund programme. It has secured £1.2 million in Government funding toward the development of a new facility for the production of high performance waterborne coatings. 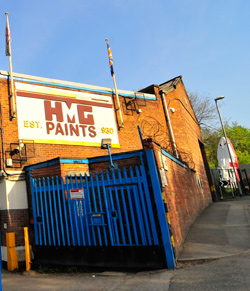 HMG Paints was one of just 119 successful bids nationally, in the second round of the £1.4 billion Regional Growth Fund programme. It has secured £1.2 million in Government funding toward the development of a new facility for the production of high performance waterborne coatings. The proposed 10,000 square feet factory extension will effectively double production capacity at its Collyhurst site, safeguard the employment of almost 150 existing full-time staff and lead to the creation of 50 new jobs within the next five years.

Employing its internal R&D resources, HMG has already developed a comprehensive package of water-based paint systems, for industrial finishing and refinishing applications in the commercial vehicle, bus and coach, rail industry and general engineering sectors. Such has been the growth in demand for these products, with their acknowledged environmental, safety and performance benefits, that HMG’s current production facilities are struggling to keep pace. So news of the RGF bid success has been welcomed enthusiastically by Managing Director, John Falder, and his management team.

“This means we can put in place our plans for a technically sophisticated and dedicated waterborne coatings production department, which will be amongst the best in the industry,” says John. “It seems that our bid must have satisfied the assessment criteria with regard to sustainable economic activity, as well as the creation and safeguarding of employment at this site. We have an outstanding relationship with our local communities and initiatives like this mean we can continue supporting the local economy and labour pool.”

Part of the Government’s commitment to creating a fairer and more balanced economy, the RGF seeks to encourage private sector enterprise by supporting projects with significant potential for economic growth, particularly in those areas currently dependent on the public sector. The minimum bid threshold was £1 million and individual projects have to make a significant contribution to the core RGF objectives.

HMG was alerted to the second round of bidding by the lead industry body, the British Coatings Federation, then John Falder and colleagues attended an RGF roadshow, where Michael Heseltine delivered the keynote address. Following that, the company decided to submit a bid and, with help and advice from MIDAS (Manchester Investment Development Agency Service), an HMG finance team put together the complex application, which took several man-weeks to complete.

Then on October 31st, John Falder was one of those invited to breakfast with the Deputy Prime Minister, Nick Clegg, where a Government investment of £950 million was announced, in the second round of the Regional Growth Fund, and HMG Paints was named amongst the successful bidders. The HMG finance team, together with chartered accountants UHY Hacker Young, is currently involved in the confirmatory due diligence phase, as part of the final process.