With help from a donation from HMG Paints, Manchester College have helped Britains Bobsleigh team to achieve it's goal of competing at Sochi 2014 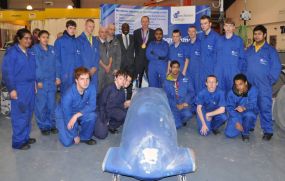 The Manchester College will be cheering on Team GB Bobsleigh at this month’s Winter Olympics, after students played their part in the team’s preparations refurbishing the bobsleigh.

Students on the Paint and Body Refinishing course worked on the two and four-man bobsleighs, repairing the damage sustained on the track and taking off as much of the old paint as possible to reduce the weight and maximise track times. The students then repainted the bobsleighs with paint donated by HMG Paints in Collyhurst.

Neil Hughes, tutor at The Manchester College, whose students worked on the Team GB bobsleigh, said: “To reach the Olympics is a fantastic achievement and we are delighted for the whole GB Bobsleigh team. Being involved in the refurbishment and repainting of the team’s bobsleigh really inspired our students and helped them to increase their knowledge and skills.

“For them to be able to watch the team taking part in the Olympics on television and know that they’ve had a part in working on the bobsleigh will give them a real boost. We’ll be cheering the GB team on next month and wish them every success in the Olympics.”

The Winter Olympics in Sochi start with the opening ceremony on 7th February. The competition starts for Team GB Bobsleigh on 16th February.

This article originally appeared on http://www.themanchestercollege.ac.uk/news/making-our-mark-winter-olympics 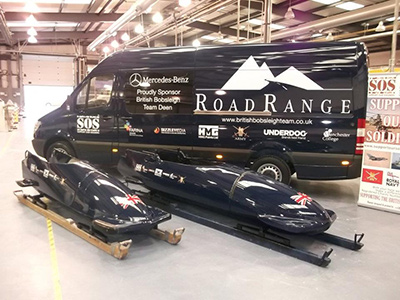